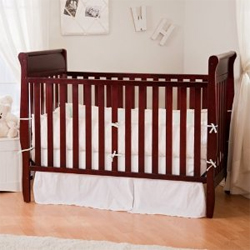 More than one factor comes into play when deciding on what infant crib to buy when a little one is on the way. The most methodical way is to read up on reviews published by consumer groups and federal agencies monitoring the safety of cribs. But being human, many consumers make their decisions based on word of mouth recommendations and feedback – good or bad – from family and friends. This way is less objective but can often carry a lot of weight. Graco, Angel Line, Babi Italia and DaVinci cribs each received mixed reviews.

Graco has already established brand recognition with its other baby products on the market, and the Graco Sarah 4-in-in Convertible is popular with parents. Depending on the retailer, it sells for between $92.99 and $245.95.

Positive feedback on this crib from one mom in Merrimack, NH., includes the ease of assembly after it’s delivered and taken out of the box, its finish and its sturdy construction. Her constructive criticism included the difficulty involved in pulling up the crib mattress to change the fitted sheet. One parent from Minneapolis, MN, complained the crib’s mattress is so low it’s hard for short people to lean over the crib railing, reach down and pick up the infant. A mom from Salem, OR., praised Graco for pricing the entire collection, including the crib, dresser and changing table, at under $300. A consumer in Wilmington, NC., reported she shopped extensively before deciding on the Graco crib. Its pros are that it looks like a more expensive crib, it matches the other furniture in the nursery and transitioning to a toddler bed was hassle-free. Its drawback is that it’s easy to scratch the finish when assembling it.

But despite all the positive consumer reviews, the Graco Sarah has issues. April 2010 the U.S. Consumer Product Safety Commission announced a recall on Graco brand drop-side cribs due to entrapment and suffocation hazards. One of the recalled cribs was the Graco Sarah.

Consumers gave a thumbs up on the Angel Line Jenny Lind for its reasonable price, its stylish looks, its durability and safety and its ability to stand up toddler use. Its drawbacks included how hard the crib is to clean and the drop-down rail. The Jenny Lind Angel Line sells online for $150 to $200.

One mom in Longmeadow, MA., praised Angel Line’s construction and glossy finish, but acknowledged the crib, a drop-side style, was in the news for safety reasons. She was partially right. One model in the Angel Line crib collection, the Longwood Forest, was indeed involved in a recall, but not the Jenny Lind, which is a fixed side. Another consumer in Woodsfield, OH, reported the crib initially took only a few minutes to assemble. She initially liked it, but several months later had problems with it and eventually got rid of the crib. A parent in Hobe Sound, FL., complained the Angel Line Jenny Lind was difficult to assemble, the directions were confusing and a part was missing from the box after delivery.

The Babi Italia Eastside Convertible received universally positive consumer reviews for its sturdy construction and attractive finish. It retails for $427.49 to $450.

A grandmother from Eagle River, AK, reported that despite the price tag, the crib’s solid construction and quality materials made it stand out from other cribs. It was easily assembled, and has a fixed side for added safety. A consumer from Oxford, AL., noted the mattress was hard to remove from the crib, but added the snug fit between the mattress and the crib rails made it safer for the baby. The Babi Italia stood up to prolonged use and converted beautifully from crib to toddler bed back to crib, said a mom in Tucson, AZ. The parent of more than one young child, she said it was easily assembled even by one person.

The DaVinci Emily 4-in-1 Convertible received mostly positive feedback, with a few complaints mixed in. This crib sells for between $145 and $198.19.

One consumer from Hatboro, PA., reported the crib was extremely difficult to put together, and the diagrams included in the assembly directions were no help at all. Despite the trouble, the end product was well worth the effort. Another consumer from Smyrna, GA.., said the crib was fairly easy to assemble and looked great in the nursery. The price was reasonable, but the paint on the crib chipped easily. A mom in Urbana, IL., said despite hearing complaints from others about the DaVinci Emily, the crib was easy to assemble and she had no problem with chipping paint. The mattress fit tightly, the construction was sturdy and there was enough room underneath to fit a clothing storage bin.

Popular Cribs and Consumer Comments about Them 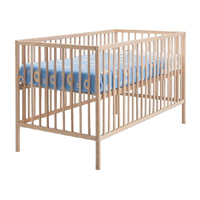 There are oodles of infant cribs out on the market and the sheer number of brands and styles can boggle the mind. Many of them are fairly homogenous with similar or identical features, but close scrutiny reveals a few key differences which make some brands… [more]