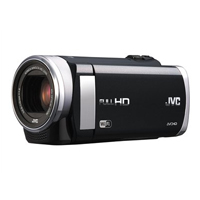 JVC has realized the Wi-Fi capabilities are the way of the future when it comes to camcorder functionality. Wi-Fi is the highlight of this already impressive model in JVC’s lineup. Sharing video with PCs and smart phones is a no hassle process. Sending short 15 second video e-mails is also a pretty cool feature. Beyond Wi-Fi, JVC has loaded this camcorder with useful and features. High speed video capture, time lapse, auto recording, and face recognition are a few included that will probably be used the most. One downfall of this camcorder is the use of the same lens and sensor of lower models in this lineup. That is not a bad thing, but for a loaded camcorder like this one more powerful hardware would be a huge plus. It is available now for less than $200.