Santoku Knife Use and History 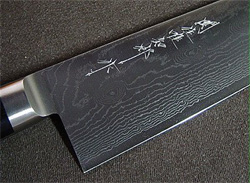 These days, the santoku knife has become a ubiquitous kitchen tool, common in all home appliance stores and TV cooking shows. You hear a TV chef rave about the santoku knife, and you wonder if it’s an ancient Japanese knife only recently brought to the West. After all, companies that forge santoku knives in Japan describe using authentic sword-making techniques to craft the steel.

In fact, the santoku knife’s history goes back only so far, to mid-1940s, when World War II was ending. Western and Japanese cultures blended together, in a way. The Japanese had discovered new styles of cooking popular in the West, so they developed the santoku knife as their own version of the chefs knife. So the santoku knife is a sort of hybrid of Eastern and Western cultures, unlike the sashimi knife, which is a true traditional Japanese knife.

How exactly does a santoku knife differ from a basic chefs knife? The answer lies in the oval indentations along the edge of the blade. This “hollow edge” allows air pockets to form between the knife and the food it’s slicing. You’ll notice when using a santoku knife that there’s less friction and struggling to cut through dense foods. Also, food slides right off the blade instead of sticking to it—something you’ll really appreciate when it comes to cheese.

The word santoku itself means “three virtues.” What those three virtues, or uses, are, no one can quite agree. Some theories include:

Whichever theory you believe, you have to agree that the santoku knife is pretty unmatched when it comes to versatility.

The santoku knife has other distinct qualities that set it apart:

If you’re an aspiring chef in your kitchen at home, then you’ll appreciate a versatile knife like the santoku. Its lightweight and thin design belie its true power. 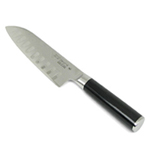 The finest quality santoku knives are guaranteed to last you many years and provide versatile function in the kitchen. The word santoku means “three virtues,” after all. We looked for a variety of factors as we selected our top 10 knives, including: 1. Durable, strong forged steel, 2. A full tang for extra strength…. [more]

How to Wash Your Knives 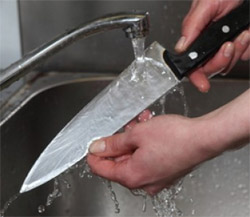 After a lot of busy work in the kitchen, chopping up and cooking food, you just want to enjoy the fine meal you’ve prepared and get the kitchen cleaned as quickly as possible. It’s tempting to throw your nice knives in the dishwasher along with all the other cookware, but you should resist the urge… [more]

The Essential Knives You’ll Find in Most Knife Sets 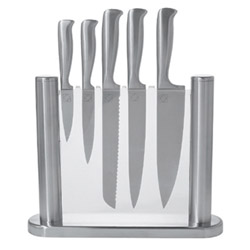 Knife sets vary in the types of knives they offer. Typically, the more knives in a set, the higher the price rises. While it’s awfully convenient to have a versatile collection for all your cooking tasks, you also don’t want to get saddled with a bunch of frilly knives that you never use… [more]