All Entries in the "Tripods" Category

Budget Tripod  7/10 By Brian Jones This is going to be the overall budget option for the tripod list. This is a far from fully featured tripod, but it would be a great choice to someone who is not sure if they will actually use a tripod. It is very lightweight, so bringing it on […]

Mini Point and Shoot Tripod  7.5/10 By Brian Jones Joby came up with a very unique design to address a very specific problem. Point and shoot users are less likely to carry any sort of tripod, even if it is a relatively small tripod. What should a point and shoot user do to fix this […]

Flexible Tripod  8/10 By Brian Jones If you have a smaller camera and keep finding yourself in situations where you need to stabilize your camera or even want to be in the photos yourself, this is the tripod for you. The standout feature here is the fully adjustable legs. You can wrap the legs around […]

60-Inch Camera Tripod  8/10 By Brian Jones Every photographer will be impressed by Dolica’s proline of tripods. The GX600 is a fully featured tripod that is lightweight and has a 5 year warranty. Some of the features include an integrated tripod bubble level, 3-position leg angles, a hook for counter weights, interchangeable spike and rubber […]

Flexible Tripod  8/10 By Brian Jones This tripod from Joby is a bit of a step up from some of the others on the list. This one is focused on high end cameras instead of point and shoot cameras. The biggest difference is the ball-head mount. This allows for very specific adjustments to get the […]

60-inch Stand Tripod  8.5/10 By Brian Jones The Amazon Basics tripod is exactly that. A very basic tripod that will have no trouble getting most jobs done and it comes at a very cheap price. This is not going to compete with a full featured tripod on any day of the week, but it will […]

65-inch Stand Tripod  8.5/10 By Brian Jones This tripod from Ravelli bridges the gap between inexpensive and professional tripods. It is pretty feature heavy for being offered at a budget price. It only weighs 3.5 pounds and can support up to 17 pounds. That strength to weight that is not found in many tripods. It […] 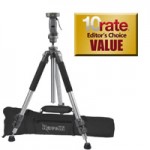 70-inch Stand Pistol Grip Tripod  9/10 By Brian Jones If you are looking for a tripod designed to take a lot of abuse, this might be the one for you. The construction is completely aluminum. It is going to be strong and lightweight. That is exactly what you need in a tripod. The APGL4 also […]

74.8-inch Stand Tripod  9/10 By Brian Jones The Slik Pro 700DX tripod is truly a solid tripod. With the ability to hold up to 15 pounds and extend to a maximum height of almost 75-inches, you will be hard pressed to find a time when this tripod won’t get the job done. It features alignment […]

68-inch Stand Tripod  9.5/10 By Brian Jones This tripod is all about the angles. It can achieve some pretty impressive low angles due to its Multi-Angle Central Column system. This means the center column can be moved from 0 degrees to 180 degrees in different vertical and horizontal potions. It is a close up and […] 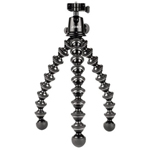 Top 10 Rated Tripods By Brian Jones Tripods are an essential piece of photography equipment. They allow photographers to achieve a stability in their pictures that could not be had in hand holding the camera. Sometimes a shot required much slower shutter speeds or the photographer is trying to catch movement with out shaking the […]