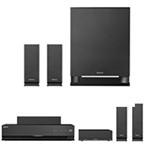 Many home theater in a box audio systems today come with a built-in DVD or Blu-ray player. This simplifies things if you don’t already own one of these players, but what are some other benefits or perks to this feature?

If the home theater in a box you select doesn’t have an integrated Blu-ray or DVD player, it’s not the end of the world. Simply make sure that the system’s inputs/outputs allow you to hook up whatever player you already have.

Following are the models our electronics category editors JB Burden and Bob Wiley think are great mid-range LED TV choices in terms of the quality/value/price/features equation. We have reviewed these or similar offerings from the manufacturers and we recommend and rated these models based on the following…[more]