40” 1080p LED TV  8/10 By Steve Holdgren The Samsung UN40H5500 LED TV, like the Samsung UN32H5500, sees some significant improvements over last year’s F5500 series, mainly with the quad core processor powering the Smart TV features. We saw a great improvement in navigating around the Samsung Smart Hub, with much improved computing power. The […]

40-Inch Full Array LED TV  8/10 By Steve Holdgren At about $450, the Vizio E400i-B2 is a worthy contender for a budget LED TV. As a perk, it includes a range of upgrades, such as the full-array LED backlighting, which enhances the contrast and uniformity of the picture. It creates better peak whites and deep […]

32 Inch LED TV  8.5/10 By Steve Holdgren The Vizio E320i-B2 is a worthy entry-level LED TV for a great budget price (the high $200 range). As a perk, it includes a range of upgrades, such as the full-array LED backlighting, which enhances the contrast and uniformity of the picture. It creates better peak whites […]

32-Inch LED TV  8.5/10 By Steve Holdgren As a replacement for last year’s F5500 series, the Samsung UN32H5500 LED TV sees some significant improvements, mainly in the form of the quad core processor powering the Smart TV features. We saw a marked improvement in navigating around the Smart Hub, with much improved computing power. The […] 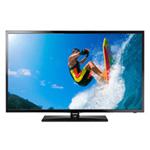 Top 10 Budget 32”,37”,40”,42” LED TVs By Steve Holdgren The small LED TV category is still very important to the average North American consumer. We’ve included a solid list of the Best LED TVs for 2012 based on the following qualitative and value criteria: 1)Solid Picture Quality based on: A) Not too much motion lag […]

32” 720p LED TV  7.5/10 By Steve Holdgren The LC-32LE450U is a bit of a strange sight considering Sharp is really pushing the large screens this year. 32 inches is their smallest while 90 inches is their largest. That’s a big difference. Luckily, the difference is price is reflected in the size difference as well. […]

40 Inch Smart LED TV  8.5/10 By Steve Holdgren The picture on this TV will depend a lot on the picture mode you select. We recommend you use the “Calibrated” Picture Mode if you are not going to professionally calibrate the TV. It’s actually pretty solid. Black levels are reasonably saturated, and the TV certainly […]

32 Inch LED TV  9/10 By Steve Holdgren At less than $300 this is going to be a crowd-pleaser all year. Side angle viewing is better than most LED TVs of this price range due to the clearer screen. Appearance and design are also much better than the competition in the 32 inch size range. […]

42 inch LED TV  8.5/10 By Steve Holdgren The LN5400 series features direct lit LED backlighing rather than the more common edge lit LED variety. It can help produce a better picture through local dimming, but this TV does not contain that feature. The picture is bright and well lit. Colors are not as true […]

32”-42” LCD TV  9.5/10 By Steve Holdgren For those that want to step it up a notch in picture quality but in a smaller size TV and have Connect Share movie options functions, the UN40EH6000 could be your set. HD picture on this TV is stunning from the Clear Screen with LED backlighting. It’s edge […]

32”-42” LCD TV  9.5/10 By Steve Holdgren Even though the LG 32CS460 is a 720p, 60Hz TV you will likely be very impressed with the picture quality, even with HD signals. LG makes very nice LCD panels the color performance, easy to use menu system with lots of preset picture mode settings, and a great […]

32”-42” LCD TV  9.5/10 By Steve Holdgren Samsung can surprise you with their LCDs nad it’s kind of a shame they have all but discontinued production of them just as the quality was getting superb. A couple years ago they were some of the best deals on the market. Luckily, they have at least produced […]