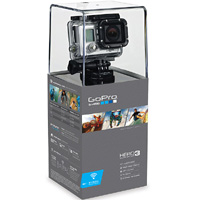 The GoPro HERO3 Silver edition is a waterproof HD camcorder that differs slightly from the White and Black versions. This is the 3rd generation of the HERO cameras, so you know that a lot of the bugs have been worked out and useful features have been packed in.The first thing is the price. It costs $100 more than the White and $100 less than the Black. What does that get you? The Silver version gets a substantial boost in megapixels for shooting stills. It goes from 5 megapixels to 11. This is handy for those looking to make larger prints of their adventures. The still frames per second comes in at 10 instead of 3 as well. Those are the biggest diffences. The video quality is top notch at 1080p, but the focal length and frames per second takes a hit for that. 720p video recording can be captured at 60fps and with a very wide lens. There is built-in wifi for the remote or interaction with the free GoPro smartphone app. The GoPro HERO3 Silver edition is perfect for a young one looking to record videos with their friends while they play outside or go on extreme adventures. It is available for $299.99.