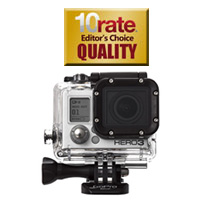 The GoPro HERO3 Black edition is a waterproof HD camcorder that differs slightly from the White and Silver versions. This is the 3rd generation of the HERO cameras, so you know that a lot of the bugs have been worked out and useful features have been packed in. The Black edition of the series is the king of them all. It sells for $200 more than the White and $100 more than the Silver. The extra money adds a lot of features making it a great value. This version gets another boost in megapixels for shooting stills. It goes from 11 megapixels to 12 with an impressive 30fps burst. This is handy for those looking to make larger prints of their adventures. Frames per second with video is really great too on this cameras. The numbers are: 1440p 48fps, 1080p 60fps, 720p 120fps. That alone is more than enough reason to drop the extra $100. There is built-in wifi for the remote or interaction with the free GoPro smartphone app. The wifi remote is included in this package as well. The GoPro HERO3 Black edition is perfect for a young one looking to record videos with their friends while they play outside or go on extreme adventures. It is available for the exellent price of $399.99.