Different Types of Ice Cubes Made By Ice Makers 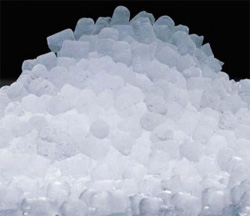 Ice is ice, you might be thinking. What does it matter what shape or color it’s in? You’d be surprised to know that many food industry establishments, businesses, and private homes consider the shape and clarity of the ice they want when purchasing an ice maker. It’s not simply about aesthetics; it comes down to the fact that different ice cubes melt differently in your glass.

Most ice makers on the market produce cloudy, or opaque, ice. This kind of ice isn’t white and cloudy because it’s dirty or impure; rather, the water is frozen at a much greater speed, leaving small air bubbles trapped inside the cubes. Many restaurants appreciate cloudy ice because it’s soft and porous, absorbing the taste of the drink it sits in. It also has the benefit of cooling drinks immediately. Many people enjoy soft ice because it’s light and crunchy, making it appealing to those who chew ice as a habit; fortunately, they won’t damage their teeth as badly as they would with hard, clear ice.

Some ice makers are designed specifically to create clear ice by removing all the air and impurities from the ice during the freezing process. More formal restaurants choose hard ice, which is clear, odorless, and tasteless. Drinks do not penetrate hard ice; on the contrary, hard ice takes longer to melt, does not dilute drinks, and only provides cooling from the outer surface. Clear ice makers are generally the most expensive type on the market.

You can find some ice makers that produce about 12 pounds of ice a day for a couple hundred dollars; these models may be sufficient for the average family. The larger ice makers with greater ice production and special controls typically cost… [more]