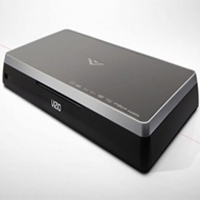 Vizio has announced its upcoming VBR430, a 3D Blu-Ray player that uses VIZIO Internet Apps Plus (V.I.A. Plus) to let you access 100s of Android apps on the big screen TV. With Digital Living Network Alliance (DLNA), you can also pull up videos, photos, and other personal files from your PC, smartphone, network drive—any other DLNA-enabled device—and view it on your TV. The Vizio VBR430 is just one of the latest products in Vizio’s Beyond TV line. The advanced Blu-Ray player promises to be a success with both consumers and electronics fanatics. The release date and price of this Blu-Ray player, slated for 2012, have yet to be announced.