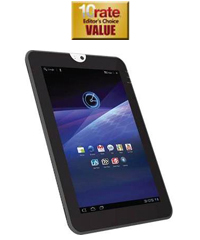 Toshiba has been making solid notebooks and computers for years. Their entry into the tablet market is no exception. The greatest features with the Thrive is its ability to plug and play into several ports – from SD cards to USB and HDMI ports- a feature that is sorely lacking from other top tablets out there. This flexibility is still relevant to many users needing to shift information from one device to another.

The Toshiba Thrive does a nice job of creating a mini notebook computer in a tablet format. It is a bit heavier and bulkier than other tablets on the market. We like that it is a solid stand-in for other Toshiba computer, even including a swappable battery pack, which certainly comes in handy. The price of this tablet makes it one of the best deals in the market, especially with all the functionality at just over $400.