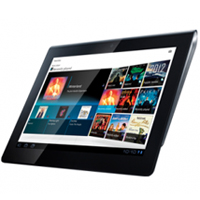 The Sony Tablet S may be best known for its roll top (in landscape mode) design. The folded design makes it easier to see what’s on screen without having to bend over the tablet as much. It also makes typing more comfortable. It runs on Android 3.1 Honeycomb operating system and has sufficient processing power with a Tegra 2 dual-core 1GHz processor. However, the touch screen is less responsive than many of the tablets on the market and notably the iPad and Playbook.

The 1.3mp front facing camera does a nice functional job and one of the other unusual aspects of this Tablet is that it is Playstation certified. While it seemed for a while that Sony might sit out of the tablet market for a bit longer, they introduced a nicely designed tablet that has a few features different from everyone else, including access to some of its PlayStation lineup of games.

This library should increase over time as new titles make their way to the Tablet S. In other ways, the Tablet S is perfect for users who already have other Sony products, including Blu Ray players, DVD recorders and HDTVs. Sony figured out how to seamlessly link these products together, giving users an ‘oh wow’ feeling on interoperability. The Tablet S is a natural extension for Sony enthusiasts.

In even smarter and all around more practical ways, Sony brings its own keyboard design to the Android operating system. Users will see how easy and natural it is to type on this device, certainly an improvement over other larger-sized tablets that are more clumsy in touch screen sensitivity.

Typing emails and staying current with work while having entertainment at your fingertips makes the Sony Tablet S
a top pick.