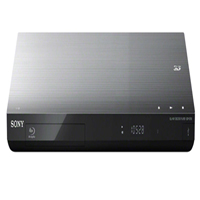 This player contains many of the same great functionality as the BDP-S590 but it adds considerable up-converting capability. It can take HD content all the way to 4K resolution. This is about 4X upscaling so major deal if you can find a display with a high enough resolution to display it. It has the Wifi compatibility to allow connection to broadband and with that comes lots of Internet TV options like Neflix, music services through the Sony Entertainment Network including its Video Unlimited and Music Unlimited streaming services, as well as the most popular entertainment services from Netflix®, Pandora®, HuluPlus™, Amazon Video on Demand, YouTube®, Slacker® Internet Radio, Crackle and many more. There is also a new social media function built right into the Blu-ray player that allows you to display your content through twitter. It is called Socialize by Sony. It also has 3D playback. The 2012 models also adds Sony’s newer, easier to use user interface to deliver greater customization and streamlined access to online content and apps. Quick access to the new portal which highlights four sections, “Favorites,” “Apps,” Video” and “Music” is available through a new “SEN” (Sony Entertainment Network) button on the device remote control.