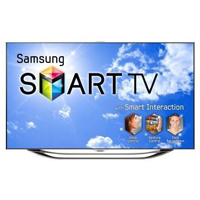 Samsung’s top of the line model does not leave a lot to be desired, except possibly true full-array local dimming backlighting which technology Samsung still has not adopted. Instead, this flat screen TV is edge lit with LED lighting. It has a local dimming feature through the edge lit LEDs called Micro Dimming Ultimate which works to light various areas of the screen individually and provide better contrast and black levels to various parts of the picture by doing so. It also has one of the most unique features on the market called Smart Interaction Smart TV which allows for facial recognition, voice command control and hand control all enabled by a front facing camera on top of the HDTV.