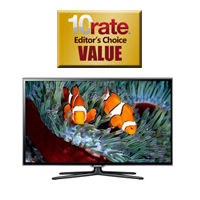 46” LED TVs are in high demand and a very popular seller for 2012 and up to early 2013 is the UN46ES6500FXZA from Samsung. One of the significant upgrades in this mid-tier model from Samsung besides a great picture contrast level is the 480 Clear Motion Rate which is a feature that improves your fast action programming by preventing blur and judder. The feature works like many others by using the LED edge lit backlighting to to improve the 120Hz native panels ability to show this programming well.

There are lots of other features to savor in the UN46ES6500 such as active 3D that is flawless, a built in web browser unleashing all of those Samsung Smart TV Apps that you may want to try (for a small price). The TV is Energy Star compliant and sell for between $1300 to $1600. There are also 55” and 60” versions available – the Samsung UN55US6500 and UN60ES6500.