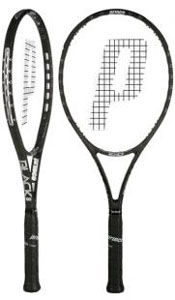 Prince has developed the EXO3 series of racquets, designed for the advanced player. Two racquets, the Prince EXO3 Black 100 Tour Series and the Prince EXO3 Rebel 95, are both high-end racquets with several different factors. Let’s compare the two models to see if one has a distinct advantage over the other.

The first thing you may look for is the price tag. The Rebel 95 comes out the winner here, priced at $95 compared to the Black 100 Tour Series’ $129 price. These are both racquets on the high end of the price scale, but they’re not as expensive as some other models available on the market, which can edge closer to $200.

As far as head size goes, the Black 100 is slightly larger, with 100 square inches compared to the Rebel 95’s 95 square inches. These are both racquets designed for advanced players who want the greatest control. The smaller the head, the more maneuverability a player has with the racquet. If you’re looking for great control, the Rebel 95 has the slight edge.

The Rebel 95 is heavier, too. It’s 12.3 ounces, while the Black 100 is 11.4 ounces. While heavier racquets produce greater power and fewer vibrations, they can also tire out the arm over time. It takes time to adjust to a heavy racquet. The Rebel 95 is head light by 9 points, the Black 100 by 4 points. For top performance and less chance of injury, you want a heavy, head-light racquet. Both of these racquets provide great maneuverability and performance, the Rebel 95 having the slight advantage.

While both of these Prince EXO3 racquets are top performers, the Rebel 95 has the advantage when it comes to price, head size, weight, and balance.