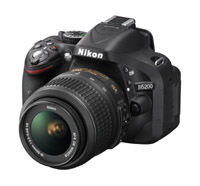 The Nikon D5200 is an update of the 2011 D5100. The most important differences are the 24.1 MP sensor, a built-in stereo mic for video, and the 39 point auto focus system found in the D7000. It weighs in at about the same as the 5100 at 19.6oz without a lens. It’s a fairly compact camera that feels good in the hands. The weight won’t bother you if you are used to shooting with a camera bigger than a point and shoot. The high resolution swivel screen is still found on this one, which is something I find useful. 75% of the time for me the screen is in the stationary position. When I want to shoot low or high, being able to turn the screen to see at any angle is a most handy feature. The 39 point auto focus system is exciting too. Auto-focus is fast and can now be used with pinpoint accuracy. The HDR mode combines the high and low exposures to form one image with all the highlights and shadows in sharp detail. For $899, the Nikon D5200 has excellent video capabilities and fast continuous shooting at 4 frames per second.

For those interested in the previous version, see the Nikon D5100 Review.