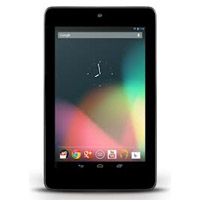 The Nexus 7 from Google is truly one of the best 7 inch tablets we have seen so far. Released in the summer of 2012, it take the idea of a 7″ tablet and perfects it. The display looks fantastic with a resolution of 1280×800 with a pixel measurement of 216ppi. This guarantees the most crisp and HD you have laid your eyes on. The tablet is powered by a Quad-core Tegra 3 processor that cuts through apps and games with virtually no effort. Two versions of this tablet are available, 8GB and 16GB are priced respectively. Google Play is included and brings a ton of apps/movies/tv’shows to your fingertips. This tablet unfortunately lacks the options to expand hard drive space, but with the cloud services its no problem. This tablet is simply our favorite 7” and probably Android tablet period.