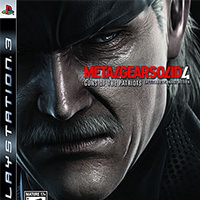 Directed by the genius Hideo Kojima Metal Gear Solid 4: Guns of the Patriots is another episode in the tactical espionage action game series. Pitting you as a much older Solid Snake you embark on what could be your final mission, utilizing stealth alongside traditional combat. This version of the game features a more 3rd person view with its greater emphasis on gunplay. But, all the fun sneaking around and stealth is still here. You can choose to play this game how you want. MGS4:GOTP also features a super addicting online multiplayer mode called MGO, which is unfortunately going offline in the up-coming months of 2012. Still, the single player story is what most fans enjoy in the MGS series. You will spend 5+ hours in the single player following a simply amazing story. For under $20 this is a MUST HAVE PS3 exclusive with a great single player + fun online.