LG has introduced a new macdaddy, spanking hot $22,000 84 inch UDTV (ultra high definition TV) that will be shipped fall of 2012. It will not only be one of the larges TVs on the market but is also the highest definition at 3,820 X 2,160. The abreviation for this resolution is 4K to differentiate it from 1080 or let you know that it is 4 times the 1080p resolution specification. We viewed the 4K specification TV at the Sharp booth at CES and were very impressed by it. The 8K television was even more impressive – rendering a better-than-3D type effect. 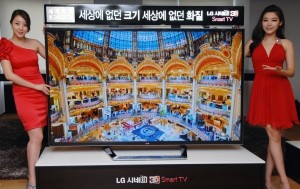 What was and is interesting is how the signal is being up-converted to 4K from that measly full HD 1080p signal. The Sharp handled this up-conversion but we are not sure yet about the LG. There are some Blu-Ray players on the market that will up-convert the signal, namely the Sony BDP-S790.

But really there is no reason the TV cannot contain the up-conversion technology within. At $22,000 they should be able to afford the best in this processing. Consider that the aforementioned Sony Blu-Ray only costs $250 and has this technology.

The up-conversion technique used by Sharp worked well and produced a great picture, however the images on screen were barely moving.