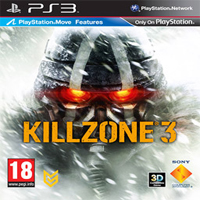 Killzone is a long running PS3 exclusive that has its place in fans hearts. In the over saturated market of FPS shooters it’s hard to stand out, especially when just on one console. But PS3 owners KNOW about Killzone, and for a good reason. One of the first games in the series to be presented in 3D and utilize Playstation Move. One of the coolest things about Killzone that set it apart is its extremely modified in-house game engine, created exclusively for the game. The developers had utmost control over everything in the game. While we do have to say the single-player story is kind of bland and your typical FPS SP, the multi-player of Killzone 3 is where the bread and butter is. Arctic tundra’s, alien jungles, and wastelands of nuclear destruction, you will battle it out online in up to 16 player warzone combat. A variety of game-modes and features makes this game shine online. In-fact, you can buy JUST the online multiplayer portion on PSN.