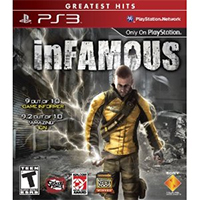 inFAMOUS (or inFamous) is an action adventure game set in an open sandbox type world. You play as a bike messenger caught in the middle of a devastating explosion that destroys several blocks of a fictional New York. Long story short, you gain special electric powers, which that game allows you to use for good or evil. These choices affect your character growth and overall game play.
The controls are easy to use and game play is fluid. You will have a blast zipping around fictional New York and zapping things with your new found powers. We do wish it had a multiplayer portion, but the single player enough is plenty of game to play through. We also chose the original over inFAMOUS 2, just because it felt like a more solid experience. If you want to be a superhero, but are sick of Spiderman, inFamous is the PS3 exclusive for you.