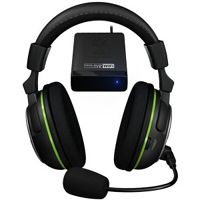 Turtle Beach, a company responsible for some of the highest quality wireless gaming console headsets, is introducing the Ear Force XP300, a headset compatible with the Xbox 360 and PlayStation 3. The Ear Force XP300 uses the wireless Bluetooth chatting feature of the XP500 while making the headset more affordable and adding rechargeable batteries. The XP300 also features new dual-band Wi-Fi technology that doesn’t suffer interference from other wireless devices in the house. The common 2.4 GHz band frequently gets cluttered with Wi-Fi signals from phones, routers, and other electronic devices, but the Ear Force XP300 uses a 2.4/5 GHz dual band that delivers interference-free audio. Gamers can expect the headset, which costs $169.95, to be available in the first quarter of 2012.