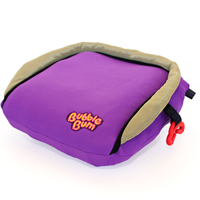 The BubbleBum inflatable booster seat doesn’t have as much name recognition as some of the more well-known brands, but it’s still a good seat. Based in Northern Ireland, BubbleBum was founded in 2009 by Safekids USA Certified Child Passenger Safety Technician Grainne Kelly, a mother who wanted a safe booster seat when traveling. The seat is making a name for itself. It was named the winner at the Mother & Baby Travel Item Awards in the United Kingdom and it received the Practical Parenting Magazine Award as well as the 2010-2011 Ulster Bank Business Achiever Award. The IIHS named it a 2011 Best Bet, and the seat exceeds federal motor vehicle safety standards as well as European safety standards.

Designed for kids ages 4-11 between 40 and 80 pounds, the seat deflates and folds flat for easy packing when traveling. It obviously provides zero side impact, head, neck and torso protection, but the tradeoff is a lightweight, easy-to-carry seat. The BubbleBum is readily available when traveling internationally – it’s marketed in places like Switzerland, the UK, New Zealand, the United Arab Emirates, Finland, Belgium, the Netherlands and Austria. The U.S. price is a firm 39.99.