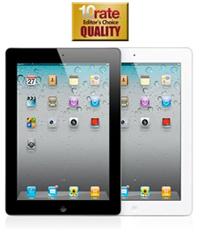 The Apple iPad2 64GB version boasts an incredibly large memory size, allowing users to carry plenty of movies, music and other large files with them wherever they go. This tablet is perfect for those on the go who want to access their movies, data and games without the need to reach out to any cloud storage.

The WiFi only feature saves consumer several hundred dollars and does not require any wireless contract, although the price of this tablet is in the upper stratosphere at over $900. Most consumers have the ease and flexibility of accessing material using WiFi, making the 3G connectivity moot for the vast majority of users.

The second iteration of Apple’s iPad series, the iPad 2 is lighter and has a bit better cameras, although you are not purchasing the iPad for its camera capability. Apple continues to hold the corner for apps when compared to other tablets currently available and can play a big part in final decision making.

Another big plus for consumers is if
they already have other Apple devices they can now all ‘speak’ to one another using apple’s cloud system, making music sharing much much easier than before.