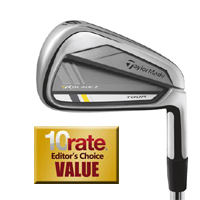 OK we’ll have to give up some award here for most innovative technology in an iron. The Speed Pocket between the face of the club and the back cavity is an insert made of polyurethane developed by 3M that is supposed to quiet vibration from mis-hits and also allow for better ball speed off the face for improved distance. I did notice perceptible distance advantage with the middle irons when using these clubs though I dont think my control was positively impacted. The Tour version of these irons has a much more refined feel and appearance. The sweet spot is still generous compared to many Tour type irons but is obviously much smaller than the Rockerbladez non-Tour version.